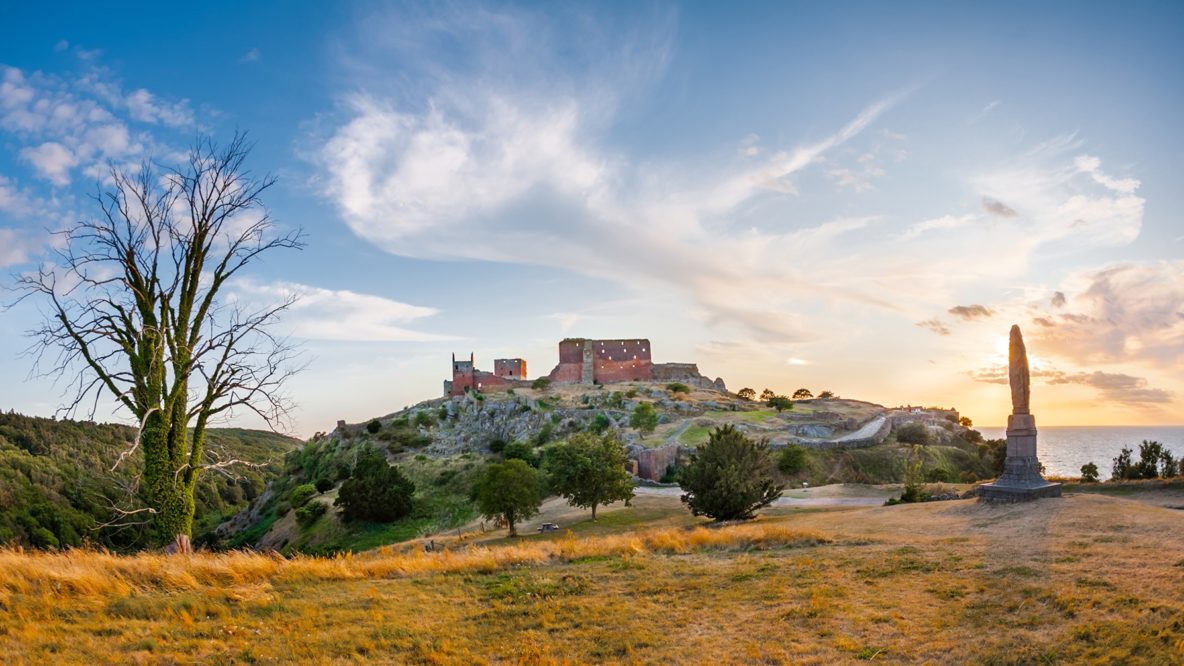 Bornholm is situated at the very Eastern part of Denmark only 3 hours away by bus and ferry from Copenhagen. It is known to be “the sunshine island” and is very different from the rest of Denmark, with its rocky landscape and small harbours from where fishermen in the old days had their small boats, because in the old days people on Bornholm did fishing and farming. Today there are still many farms on Bornholm, but the fishing has almost disappeared and today Bornholm is known for its gourmet food with local breweries and restaurants being proud to produce food from the area close by. Being a very small island with its 120 km coastline, everything is close at hand. The perfect destination for biking shorter distances and still being able to experiencing a diverse landscape.

We start out together from Copenhagen by driving by bus for 75 minutes to Ystad, situated in the very Southern part of Sweeden arriving 09.35 to Rønne the biggest city on the island with its 15.000 citizens.

Upon arrival we will rent E-bikes, which will help us, when the terrain gets strenuous. Our luggage will be transported to Allinge, so we don’t need to worry about that.

During our bike trip around the island, we will make stops either to explore or have a drink or a snack.

Our very first distance starts out in Rønne and continue through forrest along the coast line with small harbours lying like pearls on a string – a distance of about 2 hours bike ride.

Our first stop on-route is the small town, Vang, where we will have lunch and a break,

Vang Harbour was in the old days used for shipping off granite from the local quarry. Today the harbour is mostly being used for leisure, where the anglers are lined up on the pier, hoping to catch some heerings. Vang also has a small sandy beach for those who are not too happy about jumping in the sea from the pier.

The next distance of the day takes us from Vang to Hammer Harbour – about 1 hour bike ride through an old forrest and passing the old castle ruin, Hammers Hus, which is one of the biggest fortresses in northern parts of Europe.

Upon arrival at Hammer Harbour – we are about to go out on a 1 hour long boat ride along the coastline and also entering small caves and passing rockformations, which, if you use your imagination, looks like lion heads og maybe camels. On the boat ride we will get a little refreshment and maybe, if we are lucky, we might hear a bad joke as well.

The third and last distance of the day goes from Hammer Harbor to the city of Allinge – a distance of about 25 minutes on E-bike. Even though it’s a short ride, we need to have a break at the local ice cream shop, which is famous for its very delicious ice cream made with local ingredients and love off course.

At 17.30 we are checking in at our hotel, which is situated centrally in the smal city of Allinge at the very northern part of Bornholm.

Before having dinner at Nordlandet’s smoke house, we will have some time for at shower and a rest. The smoke house is in walking distance from the hotel situated by the edge of the sea. After the dinner, where we will have many local specialities, we go for a walk and passing one of the best places to have a dip into the ocean if weather allows.

Upgrade dinner and accommodation on your first day

Jesper Vollmer, who owns RÅ (Raw) eatery, has been the chef for the Danish Royal family for 10 years. Together with Jesper, we will prepare a 3-course menu, where Jesper will do the wine menu at this very special place with the view over the Baltic Sea.

Our accommodation for the night is Hotel Nordlandet with its Nordic interior and splendid view situated just next door.

Day 2 – Kayak, cave and the town of Gudhjem

We will start the day nice and quietly with a breakfast at our hotel before we are going out kayaking from the sandy beach in the town of Sandvig, paddling out to get a sea view of the old castle ruin Hammershus and the Hammer lighthouse. You really get to understand why they build the castle here with the steep cliffs rising. In the old days guards were walking on the path along the coastline, if weather was rough to help ships in need, if they came too close to shore.

This activity is weather dependent

Before we continue biking along the Easterne side of Bornholm, we will have a light lunch.

Today’s first break is at Rø art museum, where we will hike down to Helligdomsklipperne, where it’s possible to challenge yourself by walking inside a deep cliff, which according to legend goes all the way to the other side of the island, to Hasle, where we passed yesterday.

Today’s last bike ride takes us to Gudhjem, where we will stay the night

After we have checked-in there will be time to have a short nap and a shower before we will walk down to the local winebar and have dinner. It’s not fine dining, but the place has a really nice maritime atmosphere.

Afterwards we will walk slowly through town to an old smoke house, where they once smoked a lot of heerings. Today they mostly serve homebacked cake and cocktails, which will help you to digest all of today’s impressions.

Day 3 Breakfast and a bikeride from Gudhjem to Rønne

After a good nights sleep, where the only sound you will hear is the waves crushing against the rocks, we will have breakfast at our hotel.

Before we bike back to Rønne, where we will follow the old railway path, we have a few hours to ourselves in Gudhjem, where we can soak up the atmosphere, buy some of the local handy craft or maybe just relax in the sun lying on the rocks and maybe have a dip in the sea.

Back in Rønne we are handing in our beloved E-bikes and have a lunch before we have some time to roam around the biggest city of Bornholm. The bike ride is expected to take about 2,5 hours.

Departure back to Copenhagen is at 18.30 with arrival in Copenhagen at 21.30

INCLUDED IN THE PRICE

NOT INCLUDED IN THE PRICE