THE HISTORY ABOUT GREENLAND AND ITS PEOPLE

One of the likely reasons for these separate events of migrations is thought to be due to climatic changes. Greenland offers an extreme climate for human survival and even small changes in temperature might have caused populations to go extinct back in time.

Greenland has through time been inhabited by different cultural populations from different “waves” of migration.

The first people in Greenland that left an archeological trace are the Independence I culture, a cultural group within the Paleo-eskimos. They were so named from the place where the first remains were found, at the Independence fjord. These pioneering Arctic people were nomades and hunters of mainly musk ox, reindeer and seals that lived in tent camps  and existed in these northern latitudes in both Canada and Greenland from ~ 3000 – 800 years ago.  The early Paleo-eskimos represent several cultural traditions, the Pre-Dorset, Independence I and Saqqaq cultures.

During the climatic cold period beginning around 800 BCE,  the Late Paleo-Eskimo or Dorset culture in eastern Arctic (eastern Canadian Arctic and Greenland) developed innovations in housing and hunting technologies. Developments that supported  population growth and more intensive use of marine mammals, including walrus. The Dorset culture is divided into three phases: (i) Early Dorset, ~800 years before Before Christ (BCE) to year 0 B; (ii) Middle Dorset, ~0  to year 600 to 800 CE; and (iii) Late Dorset ~ year 600 to 800 to 1300.

The Paleo-Eskimo tradition in the eastern Arctic ended sometime between year 1150 to 1350, shortly after the sudden appearance of the Neo-Eskimo Thule whale-hunters from the Bering Strait region.

The Saqqaq culture migrated South following the route from Canada to northern Greenland. The reason why the migration route can be traced from this cultural group is that they left a trail of evidence along the western coast line from their stone tools used for both hunting and fishing. All the way up to modern day society in Greenland fishing and hunting are the primary ways of living.
The first stone tools from the Saqqaq culture were found in the settlement Saqqaq in the Disco Bay area. The Saqqaq survived for around 1000 years and then disappeared, most likely because of climatic changes that caused a lack of prey to hunt for and feed from.

The Dorset culture came from the Cape Dorset area in Baffin Island in the north-eastern Canada. Some of the characteristics of the Dorset culture is the use of the so-called “woman knife”, the ulo and large snow knives made from walrus teeth. It is also believed that the Dorset culture brought the technology of building iglos and were the first to bring iron knives.

By the early second millennium, western Thule cultural groups began their movement into the eastern North American Arctic.  The Thule culture brought more effective means of transportation like dog sleds and large skin boats, complex tool kits like sinew-backed bows, and harpoon float gear for hunting large whales. Hunting the marine mammals for food and resources was more competitive than the traditional hunting and fishing cultures. Hence, the Thule culture spread quickly throughout the eastern Arctic and rapidly replaced Dorset in most, if not all, regions.

The whaling industry declined during the latter part of the Little Ice Age (16th to 19th century) resulted in a readjustment to ice-edge hunting of walrus and breathing-hole hunting of seal, laying the foundation for modern Inuit cultures.

The Norse (Vikings) formed settlements in Greenland around year 985 and occupied regions in southern Greenland for about 500 years. The Vikings therefore occurred contemporaneous with both the Late Dorset and Thule, reaching Newfoundland and Labrador in eastern Canada around 1000.

In year 982 Erik the Red arrived together with his Icelandic brothers on a Viking ship in southern Greenland. In 986 more northern farmers arrived and settled in the settlement “Østerbygden”, located in the most southern part of West Greenland. This immigration became the beginning of a connection between Greenland and first Norway then 400 years later to Denmark.

It was around the 1600 that the language of the eskimos became a written language and the eskimos themselves were taught to read and write.

The missionary Hans Egede from the common Danish-Norwegian kingdom came to Nuuk in 1721 on his search for the Norse people. He never found them and it is still a mystery as to why they went extinct. They are believed to have disappeared sometime during the 1500. The missionary wanted to preach Christianity to the Norse and in their absence he christened the eskimos, who are still today belonging to Lutheran-evangelic direction within Christianity. Hans Egede left Greenland for Norway in 1736. His influence has formed a great part of Greenland’s more recent history. In some places he is even called the apostel of Greenland.

Since the disappearance of the Norse, several other expeditions from England and Scandinavia arrived in Greenland during the years

1500-1600 and 1600-1700. Especially the European whale hunters made contact with the Inuits. Meetings that accelerated the trade of whale oil and other of the rich resources from Greenland.
In 1774 the Royal Greenland Trade was established and had monopoly on any trade with Greenland, thereby isolating Greenland from doing trade by other nations. The Danish state meant that by controlling the trade and isolating Greenland they could also prohibit that infectious diseases and alcohol would harm the Greenland population. Therefore, Greenland became completely closed to outside world and exchanged their furs to the Royal Greenland Trade for essentials like wood, wool and guns for hunting.

During the 1830’s money became slowly introduced as a means for trade, and with the money more luxurious goods were bought like sugar, coffee and tea. Earlier on when trade was based on exchange of goods instead of trade it was more common to save up or store goods for the cold winter months. With the more accessible market combined with periods of colder climate and less optimal hunting opportunities famine occurred.

During the Second World War Greenland was an important position for flights from USA to England. The missing contributions from Denmark to Greenland were brought in from USA and Greenland has a fairly healthy economy during the war due to mining of Kryolit and fishing of cod.

Up to 1953 Greenland was considered a colony of Greenland but has since a change in the Danish constitution had a status as a commune of Denmark. During the years 1952-1963 around 3000 houses hospitals were build and the tuberculosis was almost cured from 1963.

In 1979 the Greenlandic people voted for home-rule where they took over responsibility for a number of political areas. At the 1st of January 1985 Greenland voted against membership of EU and in 2008 they voted for self-rule whereby they are free to decide when they want to take over more responsibilities like e.g. justice and court and health

In Greenland something called “coffee-mik”, is a social event where people meet for different types of celebration like birthdays, confirmations or other kinds of celebrations. Coffee-mik is a reason to open up your house for the people of town and get together. The relationship to family is very strong in Greenland and has probably been reinforced by the isolation of the settlements that reduced the amount of interaction with people from “outside” the local communities.

In Greenland the traditional costume for special events has a strong value and none of the costumes are identical but tailored according to the tradition of the family that is inherited through generations.
It is often at the confirmation that a person gets his or hers traditional costume that lasts a lifetime. Fur and pearls are always an important part of the costume but different types of materials like, cloth or wool can also be used. There is also a difference in the female costume depending on their age. The young women wear a red shirt underneath their pretty pearl collar and the older women wear a purple shirt. The national costume is used for celebrations like confirmation, weddings, etc.

Another special character of Greenland are the many colourful houses that dates back to the building up of the Greenland society in the 1960’s. At this time the colour of the houses carried a special kind of meaning. Yellow was for instance the colour for hospital or doctor.

Even though the Greenland population has a strong belief and tradition for using the church they also keep some of their more ancient beliefs related to nature. 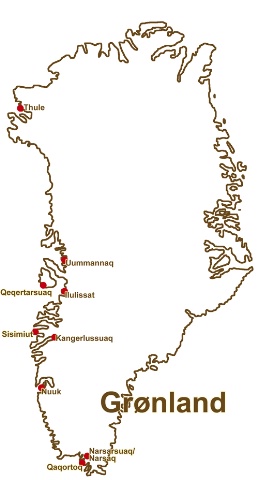 Greenland – or as it is called in Greenlandic, Kalaallit Nunaat (country of the Greenlandic people), is the largest island in the world with an area of 2.175.600 km2 where around 85% is permanently covered by ice. The ice-free area (341.700 km2) corresponds to a little more than the area of Finland – or about 10 times the size of Denmark.
Greenland is placed in the Arctic Sea in the most northern part of the Atlantic Ocean.
Second to Antarctica Greenland is the largest ice covered area in the world. In geographic terms Greenland belongs to the North American continental plate but on the geo-political scale it is connected to Europe.

Deep fjords with floating icebergs, high mountains and a richness of islands and reefs characterize the coastline of Greenland. The coastline stretches longer than 44.000 km and from the northern tip of Greenland, Kap Morris Jesup there is about 740 km to the North Pole. Hence, Greenland is the most northerly placed country in the world. Moreover, Greenland is also one of the oldest land areas in the world with its bedrock dating back to 3.8 mia. years.

The inland ice cap consists of hundreds of thousands of years frozen precipitation that is layered each season and can be counted back in time with sensitive glaciological techniques. In its center the ice cap is approximately 3500 m high. Due to this massive size of ice, ca 9% of the world’s fresh water reserves are stored here. When the ice cap expands and moves, it forces local glaciers and ice bergs to be calved into the sea. Some events are so drastic that small and large tsunamis can occur.

The highest point in Greenland can be found at “Gunnbjørns field” with its 3.693 meters above sea level and is defined by the Atlantic ocean in the South, Davies Strait and Baffin Bay in the west, Smith Sea and Nares Strait in the northwest and by the Lincoln and Wandels sea in the North. Towards the East the border of the Greenland sea and Denmark Strait is found and from there are only 240km to Iceland.
The closest neighbor to the West of Greenland is Nunavut in Canada that has an Inuit population. Further south Canada and USA.

The climate in Greenland is Arctic, which means that all months has an average temperature below 10 degrees Celsius. However, as the size of the country is so large the climate varies a lot between the southern part and the northern part.

See our tours to Greenland